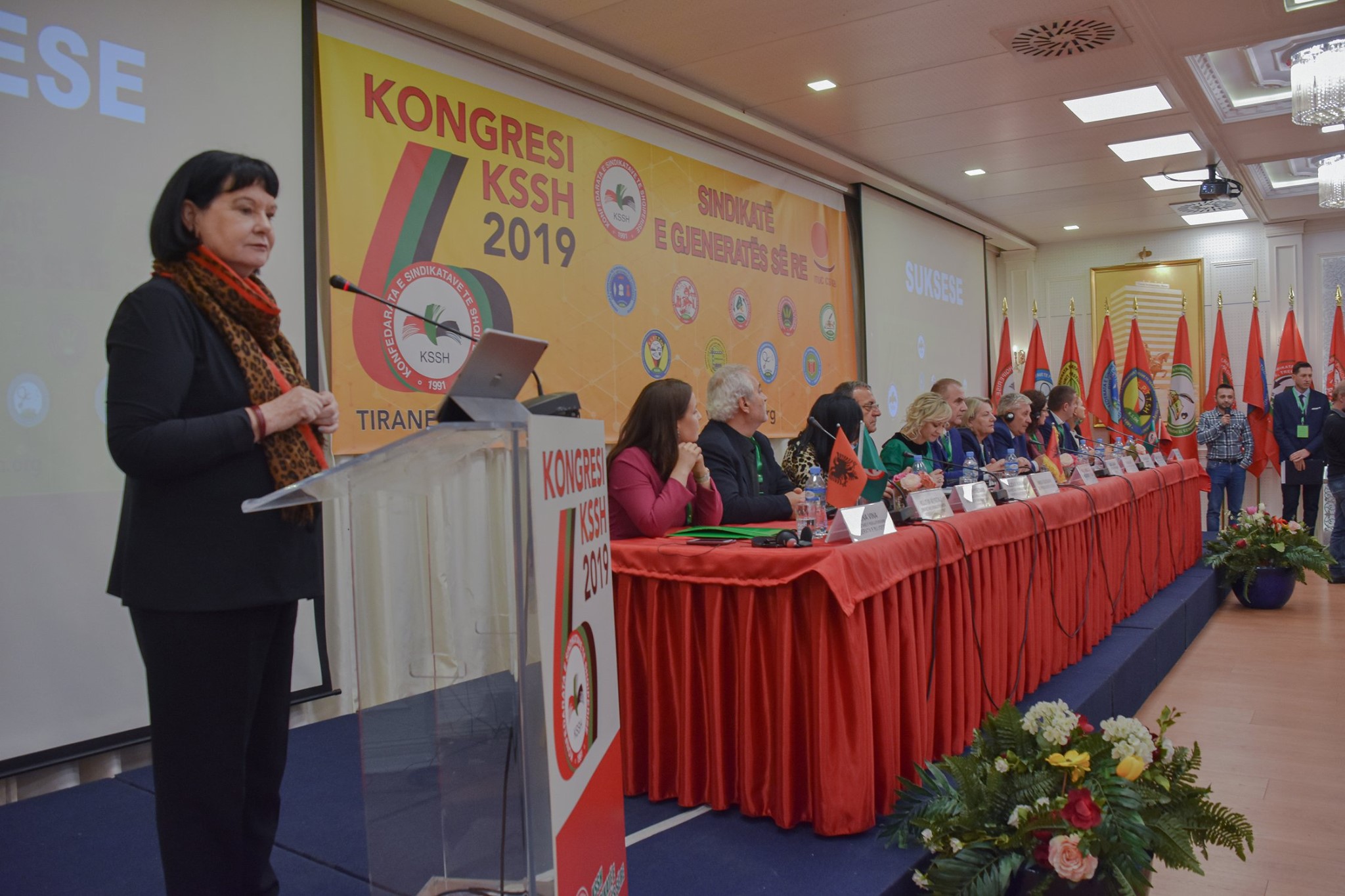 The Confederation of Trade Unions of Albania held its 6th Congress on November 09, 2019.

After a successful six months of work, KSSH successfully closed the analysis of its work, identified the results, successes and failures, drew conclusions and set objectives for the next 5 years, renewed and selected in accordance with KSSH Statute and Electoral Regulation all its structures. Assemblies of enterprises, sectors, institutions and territories, Congresses of Federations were a positive example of a successful model of an electoral campaign within the KSSH.

The proceedings of the Congress were attended by the General Secretary of the International Trade Union Confederation (ITUC), Ms. Sharan Burrow, as well as many delegations from international sister trade unions, European, American, Asian, Arab.

On behalf of the Cabinet, the Congress was welcomed by the former Minister of Labor and Social Affairs, currently the Minister of Tourism and the Environment and a member of the Socialist Party Presidency, Mr Blendi Klosi.

Ms. Sharan Burrow, ITUC Secretary-General in her address emphasized the indispensable role of unions in our country with a nonfunctional democracy and one of the weakest economies in the region, and highlighted and encouraged the KSSH’s efforts to being a democratic trade union organization, open and cooperative with all stakeholders.

The President of KSSH, Mr. Kol Nikollaj in his speech emphasized that KSSH is now a leading organization in the trade union market in Albania, organizationally consolidated and democratically open to all Albanian workers. KSSH does not live with its history and the delirium of greatness, but is an active, cooperative organization, and as a future objective it will have the cooperation and improvement of institutional relations between unions, as the first challenge it must face on a daily basis. . For the next 5 years the protection of the socio-economic interests of Albanian workers without political, economic, social, ethnic and religious differences remains the subject of the KSSH.

The KSSH will continue to have priority areas: the right to work, employment, social protection and social dialogue, and will engage in dignified work and will work with full strategies, concrete objectives, and clearly defined goals such as: “Improvement of working conditions “,

“Reduction of working hours “,” Payment in kind “,” Subcontracting work “,” Transfer of coorporate social responsibilities “while maintaining fair relations between local and central government,” Remote work ” , “Homework”, etc. We will pay close attention to the benefits of the new digital technology in the employment relationship. The KSSH will work to turn digitalization of public services into an advantage.

The Congress noted that Albania is still the only country in the region and beyond with a meaningless loop of rules of the game to engage in social dialogue. KSSH has demanded and will continue to insist on the necessity of a special legal package that supports and develops an effective, inclusive and successful social dialogue, a harmonized social dialogue at all three levels and respecting the fundamental rights of employees. This legal package that the KSSH requires should establish clear and transparent rules for: The organization and functioning of the trade union movement of employers and employees, set standards and rules for negotiating and signing collective barganing at all levels and set clear numerical and acceptable criteria for union representation and union voting.

The KSSH is concerned that accidents at work have become a national emergency. She has consistently raised the issue, whose consequences have been fatal to many workers. Congress passed a special resolution on this.

6th Congress of KSSH discussed and approved financial economic activity through special report presented by KSSH Economic Center Executive Director, who informed Congress and public opinion with concrete figures on management and administration of economic assets of the KSSH, she noted that all KSSH assets are well-managed, in accordance with legal and statutory procedures. KSSH has organized all of its membership quota activities on banking, and manages union property in full compliance with union property law.

The KSSH Congress adopted 4 resolutions that set out the basic priorities of its work agenda for the next 5 years. They were:

Congress approved some statutory changes, as well as the organizational structure of the KSSH for the next 5 years, which will be 10 Federations, out of 8 that were previously.

Finally, Congress, in accordance with the Statute and Electoral Regulations of the KSSH, elected the governing bodies for a five-year term, and re-elected KSSH President, Mr. Kol Nikollaj.

Congress delegates urge the Albanian Government to draft a new social contract, which should include: